Thank you to Catholic World Report for this excellent article, which manages to clear up what is going on.Just one remark: to be precise, the looting of Aleppo’s factories is not attested to only by the government but also by the people, and first and foremost by the manufacturers of Aleppo, whose equipment eventually turned up in Turkey.   OraproSiria


The war in Syria is in its fifth year and is now almost entirely focused on once-beautiful Aleppo, the country’s biggest city, and—before the war—also the biggest manufacturing center of the Middle East.  According to Aid to the Church in Need, before the war there were well over a million Christians in Syria. Today they are about 400,000. These survivors tell ACN that their towns, homes, and churches have been destroyed by ISIS. 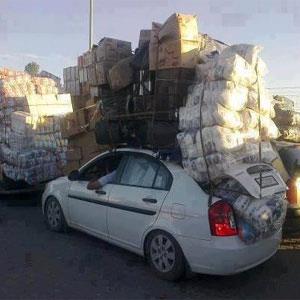 Targeted from the very outset by opposition forces as a key area to take over in order to cripple the Syrian economy and hasten the ouster of President Bashar al-Assad, Aleppo’s factories were looted early on and emptied of their machinery, which was sent to Turkey, never to be seen again, according to the Syrian government.

In Aleppo, Syria’s mini-world war by proxy may at last be in its final stage, as the Syrian army, which holds the west of the city, is fighting to root out the last bastion of the opposition formations entrenched in the eastern part of the city.
At least, this is the picture one gets from Catholic and Christian Syrians.
One enormous problem lies in the identity of the insurgents, which Western powers and media continue to lump together as “rebel groups,” despite the fact that even the US State Department has admitted that al-Nusra (the name that al-Qaeda goes by in Syria) “is present among the fighters in Aleppo,” where “there is an intermingling of the groups.” Over the years this “intermingling” of the rebel factions with cutthroat formations that are officially termed terrorists by both the US and by the UN has radically changed the make-up of the insurgency.

A recent report in the Financial Times regarding the weeks-long siege on Aleppo adds another complicating element. “The offensive against President Bashar al-Assad’s troops may have had more foreign help than it appears,” the report states. “Activists and rebels say opposition forces were replenished with new weapons, cash and other supplies,” ferried in for weeks by regional backers, including Saudi Arabia and Qatar, across Turkey’s border with Syria.
“This assistance occurred in spite of the fact that the rebel offensive—dubbed ‘the great Aleppo battle’—has been led and organized by Jabhat Fatah al-Sham, a jihadi group formerly known as Jabhat al-Nusra.  Some rebels claim that US officials supporting moderate rebel forces intentionally turned a blind eye to Fatah al-Sham’s participation in the offensive to ensure that the opposition maintains a foothold in Aleppo.”

According to Dr. Nabil Antaki, a Syrian Marist missionary working as a physician at St. Luke’s Hospital in West Aleppo, only a small percentage of the rebel forces are “the democratic opposition”; the majority, he claims, are now “terrorist groups intent on establishing an Islamic state.”
“In the course of time these [moderate] groups have been absorbed by the terrorist groups, which currently represent over 95 percent of the hundreds of armed opposition groups present in Syria,” Dr. Antaki says. “Therefore the [West-supported] Free Syrian Army and the opposition—which are not terrorists, but are nonetheless armed—represent a mere 5 percent of the armed groups, the rest all being terrorists.”
Dr. Antaki believes that some of the rebel groups not currently classified as terrorists by the international community do, in fact, match the definition of terrorist groups. “The main [terrorist groups]—Daesh [ISIS] and al-Nusra—have been added to the official list of ‘terrorists’ by the United States and by Russia, so that everyone has the right to target them from the air. However, there are also other groups that come from al-Nusra and are not yet classified as terrorists; among them are three main groups, Jaish al Islam [Army of Islam], Ahrar al Sham, and Jaish al Fatah [Army of Conquest]. These three have been created by al-Nusra itself, in order to wriggle out of the list of terrorists,” Dr. Antaki says.
In the context of the battle for Aleppo, this translates into reports that the Syrian army is “setting siege to Aleppo,” reports that often disregard the fact that civilians in large numbers have fled to West Aleppo, which is controlled by the Syrian regime and which is home to 1.5 million people, and away from East Aleppo, the inhabitants of which have been reduced to only a fifth of that number while under rebel control.
In the words of Dr. Antaki: “A few months ago the Syrian army went on the offensive to bring some relief to Aleppo, which has been surrounded and besieged for the past three years. But according to the Western media, it was the Syrian army that was setting siege to the Syrian people in Aleppo, while in fact the opposite was true—the Syrian army was trying to put a halt to the three years of terrorist siege of the city. The people are not afraid of the Syrian army, they are afraid of the terrorists.”
“When we cry out for help for Aleppo,” he explains, “it gets transformed into a cry for East Aleppo. So when the media announced that the last pediatrician of Aleppo had been killed, well, it’s not true, because in West Aleppo there are about 100 pediatricians. Perhaps that was the last pediatrician in the other area, I have no idea, I have no information, but what I do know is that the inhabitants of the Eastern section live under the control of the terrorists.”

For many inside Aleppo, the international coalition of 60 countries that President Obama vowed would “degrade and ultimately destroy” ISIS appears to be dragging its feet. According to the US Department of Defense, as of July 26, 2016, the international coalition had carried out 14,093 air strikes since September 2014, which amounts to an average of a little over 21 airstrikes per day. Russia’s intervention in support of the Syrian government, starting on September 30, 2015, registered in its first 107 days 5,662 raids and the launch of 97 missiles against ISIS and other jihadi targets.
“When it was the Americans who were doing the bombing, the Islamic State kept expanding, eventually occupying up to 50 percent of the territory,” Msgr. Georges Abou Khazen, apostolic vicar of Aleppo, said in a recent interview with Italy’s Il Giornale. “It was only when the Russians stepped in and started bombing that ISIS finally started to withdraw. Let me say it …One can have serious doubts about the role played by the Americans.”
“Before the Russians stepped in to help the Syrian government, the rebel bombs rained on the city of Aleppo,” Msgr. Khazen continued. “We lacked running water for two months, and electricity for six. Today, instead, everything is at last going back to normal. Who would you expect us to support? The Al- Nusra rebels and their ISIS allies, or the Russians?”. 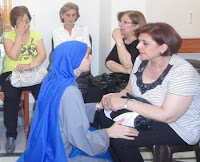 Another Catholic voice out of Aleppo is Sister Maria de Guadalupe, a missionary sister of the Argentinian Institute of the Word Incarnate, an order accustomed to bringing the word of God to some of the most dangerous places in the world. During a brief visit to Chile last December she reported that “in these last few months, with the Russian intervention in the war in support of the Syrian national army, there has been positive progress in Aleppo, because for the first time we witnessed the Islamic State withdraw and cities being recovered.” Although the situation is still dramatic, “in the last few weeks we’ve seen the army succeed in reconquering some very important neighborhoods, and above all the Christian ones, which in the past few months had been ridden by gun fire,” Sister Maria continued. “This success has led ISIS to intensify its attacks and guerrilla warfare. In the same way, every military advance of the army is accompanied by an intensification of the rebel attacks.” 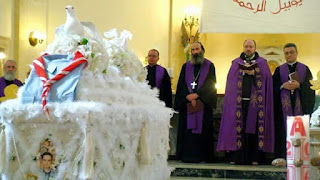 A recent controversy regarding the city and its inhabitants centers around the UN’s demand in August for a few hours’ ceasefire to allow the passage of food and medical aid to the area under the control of the terrorists. Father Ibrahim Alsabagh, a Franciscan pastor and keeper of the Latin parish of St. Francis in Aleppo, was interviewed on Italian radio about the truce. Asked whether the ceasefire was being respected, Father Ibrahim, whose parish is in the part of town safeguarded by the Syrian army, responded: “What we hear is that this truce works in one area, where there is respect and the foodstuffs have been brought in. But there is another problem…. Just as along with real refugees to Europe there are many in disguise who enter with the intention of killing people and triggering explosions among the civilians, so too our fear is that along with these food supplies may come new weapons for the militias that hide among the civilians.”
“Our experience,” Father Ibrahim continued, “is that every time they open ‘humanitarian corridors’ from the east to the west, along come people with bombs who blow themselves up in areas which had become safe. So on the one hand there is a need to get the necessities of life to the civilians trapped on the other side, but it must be made clear to all involved that they must not use the suffering of innocent people as a banner to speak of peace, when they actually mean to work for the opposite. What we need is a real peace agreement, not a three or forty-eight hour truce.”