"Here is How We Lived in East Aleppo” 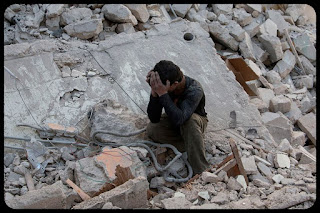 Aleppo, January 8th 2017. He lets us film him, but Mahmud Fahrad is not his real name. He’s afraid of retaliation in this devastated city of Aleppo, where few people think that all of the jihadis have really left for good, on the coaches supplied by Assad to get to Idlib. Because this bricklayer who lost his job years ago and has had to make ends meet with a wife and four children, wants to let people know what life was like in East Aleppo, under the rule of the rebels and jihadis.

“We were trapped there since March 2012, when it all began,” says Mahmud, “And they were four years of horror. For example, they starved us. In these years I never ate either meat or fruit, it was almost always lentil beans and burghul (split wheat). Even bread was scarce. And all the while, they had plenty of everything and ate all they wanted. Their deposits were full and they mocked us: when there was a holiday, they would slaughter sheep and cows and sell off the scrap pieces, such as the shins or the entrails, at 10,000 Syrian liras a chilo, i.e. the price of the choicest meat.

And what about the hospitals? They say that the army bombs killed a lot of people….

“Bombed hospitals? Maybe. All I know is that they were off-limits to us normal Alepins. They were reserved to them and to their families. When one of us got hurt or had some health problem, they would shut the door on us even if we died. I never saw anyone, in the entire four years, being admitted to a hospital”.

Who exactly are these “they” that you are talking about?

“There were loads of foreigners, almost from everywhere in the world. Especially after the army started to get closer. We could recognize them, as they went around the streets on in the marketplaces, Because they needed someone to help them with the language. So we heard them say that so and so was French, this other one was American, another Turkish…. There were also many Saudis, Egyptians, some Japanese. But at the end of the day, they all resembled each other.”

What do you mean?

“Look, these people here don’t pray to Allah. The God they pray to is the Dollar. The various groups had divided that part of town among them and first and foremost they tried to get as much money as possible out of it, at the expense of the defenseless people. Every so often they would kill each other on account of money. Say one of the heads got too daring, and went beyond his allotted area: a bomb under his car would take care of everything. Politics…. Maybe. But these people had three main passions. The first one, like I said, was money….”

And the second one?

“Sex. They went crazy, also because they felt omnipotent. Any one of these guys could do you in with impunity, no one would have lifted a finger to save you. There were two ways they used to try to get women. They tried to buy them, by taking advantage of the people’s poverty. There were families who gave a daughter away for 100 dollars, or even for just a few bags of rice and lentils. Or else they took them away by threatening them with violence. For example by threatening to kill their parents. Today Aleppo is full of so-called “widows”. Women who were forced to marry a militiaman who died or ran away, women whom nobody wants now, not even their original families”.

And the third passion …

“Shooting, killing. Before starting out for a raid they took some pills that were rumored to come from Turkey. I don’t know what they were, but after swallowing them their eyes opened wide and they became frenetical. Among them there was a great deal of trading going on in hashish and other drugs”.

And what about prayer? Islam?

“They forced us to go to the mosque but that stuff had little to do with our religion. There were Pakistani and Egyptian preachers and the only subject they ever broached in their sermons was war, jihad, the duty to fight the apostates. In sum, all they ever talked about was killing people”.