Appeals against the Embargo, a Weapon that is Killing the People 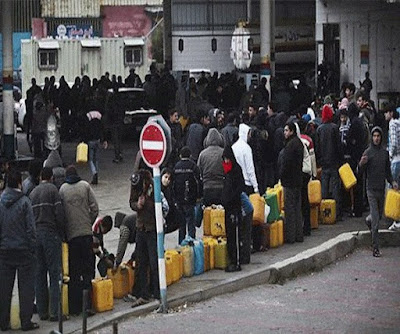 An Appeal from Syria : “Please circulate this message so that the world many know what the consequences of the embargo are on my people”.

The embargo imposed on Syria by the United States and Europe to the purpose of ousting its government is plunging the Syrian people, already debilitated by 8 years of war, into a never ending agony. By preventing any fuel from entering this martyred country the West is perilously damaging the daily life of the Syrian people. Buses, taxis and cars are paralyzed to the point that not even students can go to school or college.

The chronically ill, e.g. cancer patients, who come from small towns to get their free treatment in the state-run hospitals of Damascus, miss their appointments because they are unable to arrive due to the paralysis of transportation, due to the lack of fuel (se for example what happened to Fadi’s mother, who was supposed to get treated 4 days ago now).
Syria’s tens of thousands of taxi drivers can no longer support their families; the lack of fuel has even stopped the ambulances, as in the case of Homs.

The “scorched earth” strategy adopted by the United States and by the countries of the European Union against Syria and its people is only increasing the suffering of a people who have been undergoing martyrdom for 8 years now.
A few European newspapers have clearly seen the dire consequences for the Syrian people of the West’s resolve to reinforce the embargo on Syria. The Washington Post has reported the decision of the U.S. Treasury Department to impose sanctions on whatever ship should go to Syria, no matter what its cargo and whatever country it hails from. The upshot is that no one can get anything at all over to us!
Even if medicine and hospitals are not explicitly mentioned in the embargo, these do not reach us anyway because banks in every country are forbidden from doing business with Syrian banks.
Hospitals work at a minimum, there is a scarcity of medicine, chronic patients can no longer be treated, hospital machinery is unusable due to the lack of spare parts, etc ...
According to Britain’s newspaper, The Independent, not even the humanitarian aid associations are able to supply food or medical aid.
Now you can imagine how the Syrians are suffering!

The European Commission for Foreign Affairs believes that the West’s scorched earth strategy is hitting out at random civilians and that the embargo imposed on Syria, to put pressure on the government to get it to change its policies and adopt the ones of the West is wrong-headed because it actually harms the weakest and poorest, and is undeniably destructive and inhuman.

From the outset all the Western media, in the United States and in the European Union, have boasted of having the interests of the Syrian people at heart and of wanting to protect the people’s rights and give them a better life: this has been revealed to be a grandiose and shameful lie, as the reality confronting us is quite the opposite! It is their own policies that are starving the population, made up of innocent and pacific civilians, and are suffocating them more and more as the days go by.


AN INTERVIEW WITH THE LATIN BISHOP OF ALEPPO 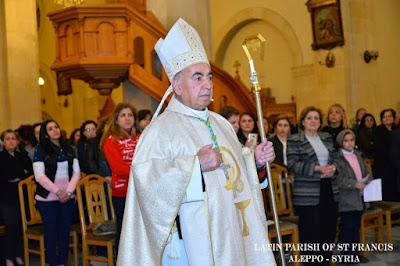 Msgr Abu Khazen asks for Prayers: “Please pray that the sanctions on Syria be lifted and we be given back our right to live in peace”


Msgr George Abu Khazen has been Latin bishop of Aleppo since 2014. There he has lived out the most difficult moments of the war together with his flock. Yet – as he explains in this interview with Gian Micalessin, for Sputnik Italia – today the situation is almost worse than when the rebel jihadis and Isis encircled the town.

“The war may be over, or be about to end, but here in Aleppo and in the rest of Syria the weight of the sanctions is becoming unbearable. We lack everything. We Christians, like all Syrians, are living in impossible conditions. Everything, even the most essential things, is rationed. Gas cylinders can be refilled only once every twenty days. Private cars have a right to twenty litres of gasoline every five days… taxi drivers can buy twenty liters every other day. Believe me, the repercussions of this rationing are appalling. Many means of public transport are no longer in circulation and school buses have almost all stopped, so many children, especially the ones that live on the outskirts or in poorer areas of town, are unable to go to class. If you add to all this the enormous rise in cost of living you will understand how difficult the situation is. For the first time in all this we are feeling the weight of the situation to be almost unbearable”.

“The situation is almost worse than before, because we used to have hope and the will to react. Today instead there is only confusion. While the battle for Aleppo was ongoing, people were motivated, they had an energy within that led them to put up with adversity. Today instead people are tired and depressed… they are losing hope…. They no longer know how things are going to end up”.
- Is it just a matter of sanctions?
Yes, the sanctions are the main obstacle to a return to normal. Syria could be self-sufficient thanks to its oil and gas pits, but these resources are in the North East and that is where the Kurds and the Americans are. The Americans are the main advocates for the economic blockade. They prevent us not only from using our oil and our gas, but also from receiving fuel from other countries. The intervention of Americans and Turks makes everything very confusing, we really don’t know where this is all going to end up.

– But at least there is no more shooting …
That’s not true either….. around Aleppo the fighting has started up again. There are no big battles but there is shooting going on. Once again we are hearing the bombs, the machine guns, the missiles, every night. At this point the rebels of Jabhat Al Nusra, Syria’s version of Al Qaida, control the entire province of Idlib. So they are practically at the gates of Aleppo. Turkey says it wants to cooperate to send them away, but the truth of the matter is that Turkey is actually their main ally. And since we know the Turks and we know that they are in the habit of promising one thing and then doing something else we are very concerned.

– Has the Christian community come home now that the siege is over?
No, unfortunately! The Christians who have come home to Aleppo are very few. But what is most worrying is the malaise of the ones who have stayed on. For the first time I am hearing them say “it was a mistake to stay here”. During the war no one ever said anything like that. Now, instead, many are saying so. And not just among the Christians. This is a very bad sign.

– Is there a risk that the presence of Christians never return to be what it was?
We have never lost hope. Not even in the darkest moments of the war have we ever lost hope. To hope is part and parcel of our faith….. so I can’t entertain the thought that Christians may no longer be present here. Our destiny is not in the hands of men but of God. He is our only savior and therefore hope can never and must never be lost.

– Do you feel supported by the Vatican?
We are grateful to the institutions of the Church that help us and to all our benefactors. It is only thanks to them that we manage to support the Christians and many other Syrian brothers and sisters.

– And what about Europe and its countries? Do you get the impression that they have forgotten you?
I actually wish they would forget about us…. Unfortunately they remember us only when they want to strike out at us by imposing the sanctions. Except for Hungary and Poland all the other European countries seem to be bent on hurting us.

– What about Italy?
Italy should reflect on the consequences of the economic blockade imposed on Syria. Please understand that the sanctions do no hurt the leaders and those high in command in the State, and they don’t halt the importation of arms either. The sanctions only hurt the poor. We Christians don’t care at all about arms. What we care about are the dire straits of the people. What are millions of families with their elderly, their ill and their children to care for guilty of? Why should they suffer? You Italians should realize that the war may be over, but the sanctions willed by the Americans make our life more and more difficult. Our message to the Italians is one alone “Pray that the sanctions be lifted and that we be given back our right to live in peace”.

– But surely there must be someone helping you?
Russia alone has always helped us out. It is only thanks to Moscow that the jihadis have not taken over all of Syria. Only thanks to Russia are there peace talks going on.

FROM THE TRAPPIST NUNS OF AZEIR- SYRIA: 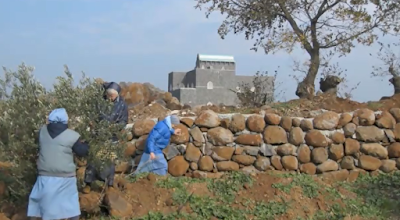 "I also wanted to tell you a little bit about the sanctions now that we are once again approaching a new vote on whether or not to renew the sanctions. I would like to let you know how hard they bear down on us, because it is the first time in all these years that we are seeing people really dejected. The renewed sanctions really hurt. There is no methane gas, no gasoline, no diesel fuel, and in our region, which is mainly  farmland, after the people grow their crops they find to their dismay that they have no means of taking them to Damascus or to market. Everything is  paralyzed, all our little activities. Many things  even today  are preserved thanks to ice, but those who produce ice can't make any because there is no electricity to run the freezers on nor gasoline to take the blocks of ice to customers.
It's all like this. ..... Same thing with bread. Bread is rationed because ovens run on diesel .... As I said, the situation is really appalling and people are truly discouraged. Never until today had we heard people saying "we wish we had left!"
These voices are not listened to in the upper spheres.
What war was unable to obtain is now being obtained by wearing people out: I think we should react, because everything is getting so difficult, there is  no gas....
Here we are able to cook because we've got solar panels, which run our electric burner and the women of the village come over to cook at our place on our electric burner, but how can the country ever start up again, under such heavy harassment? There are drafted army recruits in Homs who can't come home in between shifts because there are no buses. People who have to go and get something can't find a car, or even if they can, the gasoline is so expensive that they give up on the idea of moving anywhere. This way work too becomes harder and more costly. Merchandise triples in price. Truly the situation is unbearable."
By Sister Martha